Here you’ll find an updated list of magazines, blogs, journals, etc. where undergraduate students can submit their work. Find out more at the links below (listed in alphabetical order)

Crook and Folly — This is DePaul’s very own award-winning journal of literature and art. The journal is run by students and accepts submissions of poetry, fiction, creative non-fiction, flash fiction, and dramatic lit.

North Dakota Quarterly — A literary and public humanities journal that has published a mixture of articles, essays, fiction, and poetry for over 100 years.

The Foundationalist — An intercollegiate literary journal organized by undergraduate editorial boards at Yale University, Bowdoin College, and University of Iowa that publishes undergraduate pieces of fiction, nonfiction, poetry, and essays.

The Orange Couch — A literary magazine created and run by tutors at the UCWbL for DePaul writers and alumni.

Be sure to check back on an updated list.

The Underground is currently seeking student contributors to submit short articles and write-ups on a recurring basis. Topics would include on-campus events (English Dept-sponsored and not), off-campus events (literary or English-related in nature), and noteworthy topics. Pieces wouldn’t exceed 1,200 words (and that’s on the longer end). I welcome your ideas/pitches, so long as they are clearly thematically related to the Underground mission.

Here’s how it works: I’ll keep a list of contributors and each Tuesday afternoon those contributors would receive an email with a list of topics/pitches that would be up for grabs. If you see one that interests you, you’d respond by noon Wednesday (the following day) with a one or two-line summary of your piece. Once I give you the all-clear to proceed with the piece, turnaround time is 1-3 days (will vary depending on topic). You send it in, I check it over, and it runs on the site.

Much of what we hope you’ll cover is the events. Many times students see events advertised that they’d like to attend but can’t make. By providing recaps, we create a conversation about the goings-on and also allow others to gain from the event.

What’s in it for you? Primarily, experience! This is a great way to build writing habits beyond those enforced by the structure of your courses and academic life. Pieces are short and informal, so the time input is low, and you’ll also learn a bit of what freelancing entails. Not to mention honing your idea-generation skills! You’ll also be able to add it to your resume and see your work on the blog.

***If being a contributor interests you, please email the editor, Anastasia Sasewich, and I will add your name and email address to the list.***

Please also note any special areas of interest so that I can keep you in mind for special assignments.

Thanks again for your interest! I look forward to working with you! 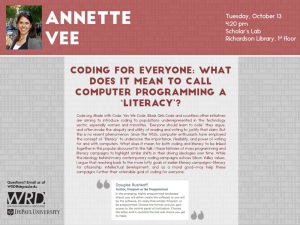 The WRD Fall Speaker will be Annette Vee from the University of Pittsburgh. The event will be held Tuesday Oct. 13, from 4:20-5:50 in the Scholar’s Lab on the first floor of the Richardson Library. She will be giving a talk called, “Coding for everyone: What does it mean to call computer programming a ‘literacy’?”
Unlike traditional evening speaker events, this will be mixed format event with the aim to create a dynamic discussion atmosphere. Annette will talk for 45 minutes, followed by a Q and A and then small group discussion (the room is set up for table topics) and/or a short and accessible collaborative digital activity using the Scholar’s Lab unique set-up.

by Carly Hubbard, Contributing Writer for The Underground

Earlier this month, I was one of eleven collected students and staff who gathered to see writer Davy Rothbart speak at DePaul’s John T. Richardson Library, doing what everyone does while at a university sponsored event: unabashedly eating free food and pocketing cold bottles of water.

You never know what to expect with visiting authors, but the mental picture I usually have in my head is that of a stern visage in a crisp suit whose very presence seems to say, “I am incredibly and ridiculously successful, as you will never be. Give up and go major in accounting IMMEDIATELY.”

But when Davy Rothbart himself appeared, my first (and admittedly nerdy) impression was that of a contemporary traveling bard. He bustled in with an oversized, army green roller suitcase that almost dwarfed our visiting author and immediately began pulling out of its hulking depths cardboard cutouts of his new book and various merchandise as his introduction was given. He had an easy, goofy smile framed by a chinstrap beard, a short but thick silver rope of chain around his neck, and a brown patterned page-boy hat.

Far from the detached and pompous figure of my imagination, Davy wore an oversized basketball jersey from a team I’ve never heard of and seemed like a perpetual twenty year-old: energized, optimistic, and in-love with his place in the world. He was introduced as “the kind of writer… that makes you wonder what you’ve been doing with your free time,” and it’s easy to see why. His long list of job titles includes Chicago Bulls ticket scalper, contributor to NPR’s This American Life, documentarian, magazine creator and editor, and of course, author.

Well, all of that clearly conditioned Rothbart to be comfortable in front of a crowd, and his whole presentation felt more like a friendly chat in a coffee-house than an event backed by an academic institution. He talked about his life, his relationships, his time in Chicago (where he roomed with a member of the band Rise Against, which apparently had its first gig at DePaul—who knew?), all the while happily espousing his belief in DIY art. He read two essays from his newest book, My Heart Is An Idiot, definitively proving that college students and Shakespeare lovers are not the only ones who have no idea what they’re doing in the arena of love.

Rothbart’s unapologetically honest accounts should serve as a reminder to those of us majoring in English that literature, or any form of art, need not be the product of LSD-induced fantasy (not to say anything against Lewis Carroll), but that our own life experiences can be fuel enough for our pens. His latest work embodies that first adage of writing hammered into us so long ago: write what you know.

In addition to his own writing, Rothbart shared with us one of his long-term projects, Found Magazine, an annual publication that prints found lists, letters, cards, post-its, and other bits of strangers’ lives sent in from people all over the country. He referred to everyone who sent in a piece as a friend and recounted for us not only some of his favorite found items, but stories people told him about how they were discovered. His words held such a sense of community, and he was speaking about practically the entire nation!

I’m sorry, majority of the English department, but you guys really missed out last Thursday night. I left the library that evening feeling incredibly inspired and comforted in the knowledge that passion for creative literature not only exists outside the hallowed halls of academia, it thrives, and I know I wasn’t the only one. Davy Rothbart was an excellent visiting writer to include early on in the academic year, and he’s set the bar very high for those who will follow (though I’m sure I’ll fall equally in love with all of them when the time comes).

Do yourselves a favor—check out FoundMagazine.com, My Heart Is An Idiot, Rothbart’s collection of short stories entitled The Lone Surfer of Montana, Kansas, and his upcoming documentary, Medora. At the very least, find him on Twitter at @DavyRothbart.

And next time there’s an awesome visiting writer giving away free wisdom on campus, come on over to the library…

Students are asked to submit 300-word abstracts of their papers or 1.5- to 2 page outlines of their panel presentations in literary criticism (in English or Spanish) or creative writing. A list of suggested topics is included on the conference flyer. Please note that papers longer than 7 pages will not be accepted, and students are limited to three submissions.

Iowa’s Poet Laureate Mary Swander will be presenting the conference’s keynote address, and accepted panelists can plan on arriving in Dubuque the night before the conference for a fun poetry event.

Hotel rooms have been reserved by the conference organizers at the Fairfield Inn by Marriott in Dubuque. To reserve a room at the special conference discount rate of $79 per night, make sure to mention Streamlines when booking your stay.

The deadline for submissions is Wednesday, October 16 by 5:00 p.m. Please use this online submissions system to submit your materials.

And finally, acclaimed author Jane Hamilton will be stopping by DePaul on Friday, October 11, from 2:00 p.m. to 3:00 p.m. for a lecture and reading.

Hamilton is the author of best-selling works such as The Book of Ruth, A Map of the World, and The Short History of a Prince, among others. This exciting event is set to take place in the Student Center Room 120.

For those interested in a small group book discussion following Hamilton’s reading, please contact the DePaul Honors Program at (773) 325-7302.

The leaves are falling, the air is crisp, and everywhere you go here on campus you hear the familiar sound of students flipping through syllabi and wondering just how they are going to finish all that work before finals roll around….

Ah, yes, the Autumn quarter is in full swing, and here at The Underground that can only mean one thing–it’s time to put together our undergraduate writing staff for the 2013-2014 academic year. If you are an undergraduate English major, minor, or are just interested in all things literary, then we want you on our team!

As a staff member for The Underground, you will get the chance to….

Interested students should contact editor Melissa Culbertson at Mculber1@depaul.edu by October 1. Please include a short application letter describing your qualifications, writing experience, interests, an idea of what kind of time commitment you will be willing to put in as a part of our staff, and, very importantly, your vision for The Underground.

New staff members will be notified via email by Friday, October 4. We look forward to an exciting year!

Threshold, DePaul University’s award-winning, all-student journal of literature and art, is soliciting applications for editors for its upcoming 2014 issue. Interested candidates should prepare a 1-2 page application letter describing relevant experience, available commitment, and a vision for the magazine. Applications can be submitted via email to Professor Borich at bborich@depaul.edu between now and October 7, 2013, at 12:00 noon. Don’t miss out on this great opportunity! 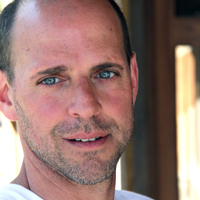 Paterniti is the author of the acclaimed new book The Telling Room: A Tale of Love, Betrayal, Revenge, and the World’s Greatest Piece of Cheese (2013) and 2001’s Driving Mr. Albert: A Trip Across America with Einstein’s Brain. His work has also appeared numerous times in respected publications like The New York Times Magazine, National Geographic, Harper’s, Esquire, and GQ,  where Paterniti currently works as a correspondent. Paterniti has been nominated for the National Magazine Award a whopping eight times and is a recipient of some of the field’s most prestigious writing grants.

Don’t miss the chance to see this accomplished writer in person! Check back with The Underground in the coming days for the location of Michael Paterniti’s reading, as there has recently been a room change. We will be sure to update you as soon as we hear!