Tell us about yourself! Where are you from, and why did you choose DePaul for undergraduate study?
I’m originally from a suburb of Philadelphia on the New Jersey side of the Delaware River, but I did most of my growing up in Schaumburg, IL. I chose DePaul for undergrad because I love Chicago and I always wanted to go to school in the city. I was the Vice President of DePaul’s Sigma Tau Delta chapter, which is the Honors Society for English. 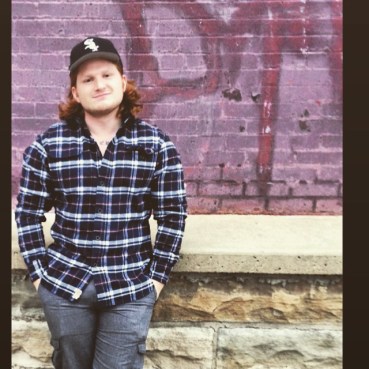 What was your official program of study, and when did or will you graduate?
I majored in English-Literary Studies with a minor in Economics. I graduated at the end of Winter Quarter.

What made you decide to major in English?
It seems sort of strange to me, but I can almost isolate a single moment when I knew I wanted to study English seriously. I’ve always been an avid reader, but I remember I was reading Faulkner’s As I Lay Dying in high school and when I got to the (in)famous Vardaman “My mother is a fish.” chapter I became completely enthralled. I thought almost pathologically for the next week about that single statement with its incredibly multifarious web of denotations, connotations, and implications. After that week I knew English was something I was passionate about.

What are your favorite English courses that you took here at DePaul? Which were your most influential professors?
I can honestly say I haven’t had a bad experience with a single DePaul English professor or course. If I had to pick professors who influenced me the most, it would be Prof. Fairhall, for serving as my thesis advisor and helping me get published in Creating Knowledge, as well as Prof. Dinius for providing me with my first research library experience working as her research assistant, and always having answers for my incessant 19th-century-American-Lit-releated questions.
In addition to recently completing your thesis, I’m told you wrote an award-winning paper on Beowulf that you presented at the annual Sigma Tau Delta conference. Can you share more about the honor, and a bit more on your paper?
The award I received was one of Sigma Tau Delta’s Isabel Sparks President’s Awards for the best papers/presentations in each critical/creative category at their annual conference. My paper “The Hall and the Un-Hall: Monsters and Setting in Beowulf” took second place in the “Critical Essays: British Literature and World Literature” category.

The paper argues that the central juxtaposition of the text is not the forces of the hall Heorot aligned with Beowulf against the forces of “evil” aligned with the wetlands, but the broader human forces of the “Hall” as opposed to the monstrous natural world of the “Un-Hall.” Heorot (the central hall in Beowulf) becomes both a material structure, shielding humans from the natural world, and a structure of the psyche embodying all that is joyful and human in opposition to the terror of the external environment. With this binary in mind, both Grendel and Grendel’s dam become figures of the uncanny that can subvert the established polarities. Their true horror as monsters lies not only in their capacity for physical violence, but because they challenge the ways in which humans of the “Hall” define themselves in relation to the more-than-human “Un-Hall.”

Tell us a bit more about your thesis. Any highlights from the research and writing process worth mentioning?
I’m happy to announce that an adapted version of my thesis has been accepted for presentations at two Association for the Study of Literature and the Environment symposia over the summer in New York and New Mexico. The thesis [which is on Walt Whitman] argues that Whitman’s tendency to dismantle boundaries between things, along with his often-radical egalitarianism, makes certain poems readable as a sort of “proto-posthumanism” in which the self is always-already a part of a vast network of interacting agencies not always restricted to the anthropological. It presents a reading of Whitman that is engaged with the environmental ethics concerns of the twenty-first century, and encourages seeing the more-than-human-world as something that is never “out there” or separate from humans as the term “Nature” has come to denote, but something that the speaker/poet is always intersubjectively implicated in.

Why did you choose to write about Whitman?
Whitman is my favorite poet, and my thesis was more or less always going to be about his work. I believe he had the prescience to recognize that he was writing at a very critical juncture of American history in which the “E Pluribus Unum” of the United States drifted dangerously close to “E Unibus Pluram.” As a result much of his work reflects this fundamental tension at the heart of any democratic project, negotiating the “self” in a world of what is apparently “others.”

What are your plans post-DePaul?

With any luck, grad school! I plan on studying English with a concentration in American Lit/Lit Theory and I’m in the early stages of assembling application materials for around ten programs.

We wish you the best of luck! Thanks for speaking with us.

*Adam will present an excerpt from his thesis at this year’s Spring English Conference, taking place on Friday, April 29th in Arts & Letters Hall from 10am-4:30pm.

Post-graduation plans: I will be a Graduate Assistant with the Writing and Publishing MA Program.

A favorite/memorable class(es) you took in the English Department, and why: One of my favorite classes that I’ve taken in the English department would have to be ENG 374: Native American Literature with Prof. Mark Turcotte. I really enjoyed this class because I was exposed to a new genre, and Prof. Turcotte was a very enlightening and engaging professor. I also really liked this course because of the class. We were all really excited about the course each week, and I had some of my most enriching class conversations in this class.

Interests: I really enjoy reading a variety of works, especially nonfiction these days, and writing, of course. I have a great group of friends, and we also love watching movies and TV together, especially nostalgic films and current TV shows like “Vikings” and “Game of Thrones.”

Favorite Book/Poem/Play/other work of literature: My favorite book right now is Nazareth, North Dakota by Tommy Zurhellen, although The Hero with a Thousand Faces by Joseph Campbell is one of my all-time favorite books. My favorite poem is The Second Coming by William Butler Yeats, and my favorite play is “Prometheus Bound” by Aeschylus.

Did you receive any awards, accomplishments, present at any conferences, or have work published in any DePaul or non-DePaul publications? I presented at the Honors Senior Thesis Conference this year, as well as the English Spring Conference. 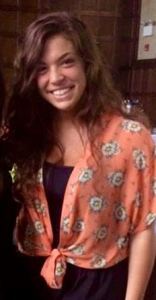 Post-graduation plans: In the long term, I hope to find writing/communications work at a nonprofit.

A favorite/memorable class(es) you took in the English Department, and why: For my capstone, I took “One Poem One Quarter” with Professor Selinger, and I loved it. We spent ten weeks on just fourteen lines, but because Professor Selinger gave us the freedom to direct our own study, it never once felt tedious.

Favorite DePaul Professors, and why: Professor Barrie Jean Borich–without question! I got to know her by working together on Crook & Folly, and since then, I’ve taken her American Literary Magazine class and contributed to a few of her own extracurricular writing projects. She’s understanding, creative, generous, and she’s become a true mentor to me!

Interests: Reading and writing (of course), spending time with my baby niece, practicing yoga, going to concerts and music festivals

Did you receive any awards, accomplishments, present at any conferences, or have work published in any DePaul or non-DePaul publications?? During the 2013-2014 academic year, I was one of the Co-Editors-in-Chief of Crook & Folly. Since then, I’ve contributed as an editorial board member and copy editor to Slag Glass City. 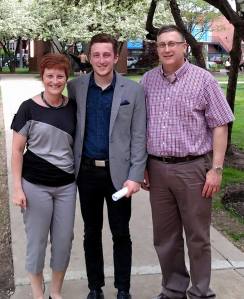 Post-graduation plans: Returning to DePaul as a Graduate Assistant to pursue a Master’s degree in English Literature.

A favorite or memorable class(es) you took in the English Department, and why: Newberry Library Seminar, though not technically in the English department. It was taught by the wonderful Prof. Marcy Dinius. It was an amazing multi-disciplinary course on the American Civil War and extremely formative
for my academic career at one of the greatest research libraries in the world.

Favorite DePaul Professors, and why: I have had so many wonderful English professors the last four
years that picking favorites would be a disservice to their phenomenal work. However, since this likely
will not make it across departments, I will say Rick Lee is my favorite philosophy Professor. He is a mad
genius.
Interests:  Chicago’s DIY music scene, watching T.V. instead of doing homework, and beer.

Favorite Book/Poem/Play/other work of literature: Waiting for Godot or Endgame by Samuel Beckett

Did you receive any awards, accomplishments, present at any conferences, or have work published in
any DePaul or non-DePaul publications?? I presented twice at DePaul’s Spring English Conference. I am a distinction student. I was published twice in DePaul’s humanities journal Creating Knowledge, once for the English Department and once for the Philosophy Department. The latter essay was also awarded The David Farrell Krell Outstanding Philosophy Paper Award.