Professor Rooney’s latest poetry collection, which won the XJ Kennedy Prize from Texas Review Press, is coming out this Fall and is now available for pre-order through TRP, Amazon, and B&N.

You can read more about it through the links and in these blurbs:

“In Kathleen Rooney’s Where are the Snows, profound and hilarious stanzas underpin a philosophy for living in an era that feels post-claiming-to-be-post-anything. The book is both a modern pastoral with startled, awestruck observations about everything from the economy to Wednesdays and a deeply emotional elegy for a complicated, yet beloved, spirituality. Rooney’s adroit use of language reveals how nostalgia and history are their own kinds of mysticism and—my favorite—that time itself is just a metaphysical joke. I mean, c’mon, her dedication reads: To the future. Rooney is at her funniest in this book, and in all the best ways: subversive, nerdy, and tragic. You won’t believe how saintly I’ve become. She writes. Big halo energy. This is a great book.”
— Sommer Browning, Author of Good Actors

“Reading Kathleen Rooney’s Where Are The Snows is refreshing. Here is a book unafraid to face the various crises of the world and admit it might not work out. The magic of Rooney’s writing is its lightness: funny, playful, cynical, indulgently dark, and poignant, Where Are The Snows is always delightful. I promise you won’t be able to stop reading these poems.”
—José Olivarez, Author of Citizen Illegal

“Kathleen Rooney’s Where Are the Snows is a book of investigative improvisation—interested in the loss and whereabouts of everyday goodness, the futility of contemporary politics and capitalism, the transience of joy and sorrow. Her supercharged lyrics pulse with interruption, iteration, and inference. They juxtapose absurd facts and self-deprecating queries with the timing of a standup comedian. Half heartbreaking, half hilarious, this book is 100% punk rock.”
—Marcus Wicker, author of Silencer 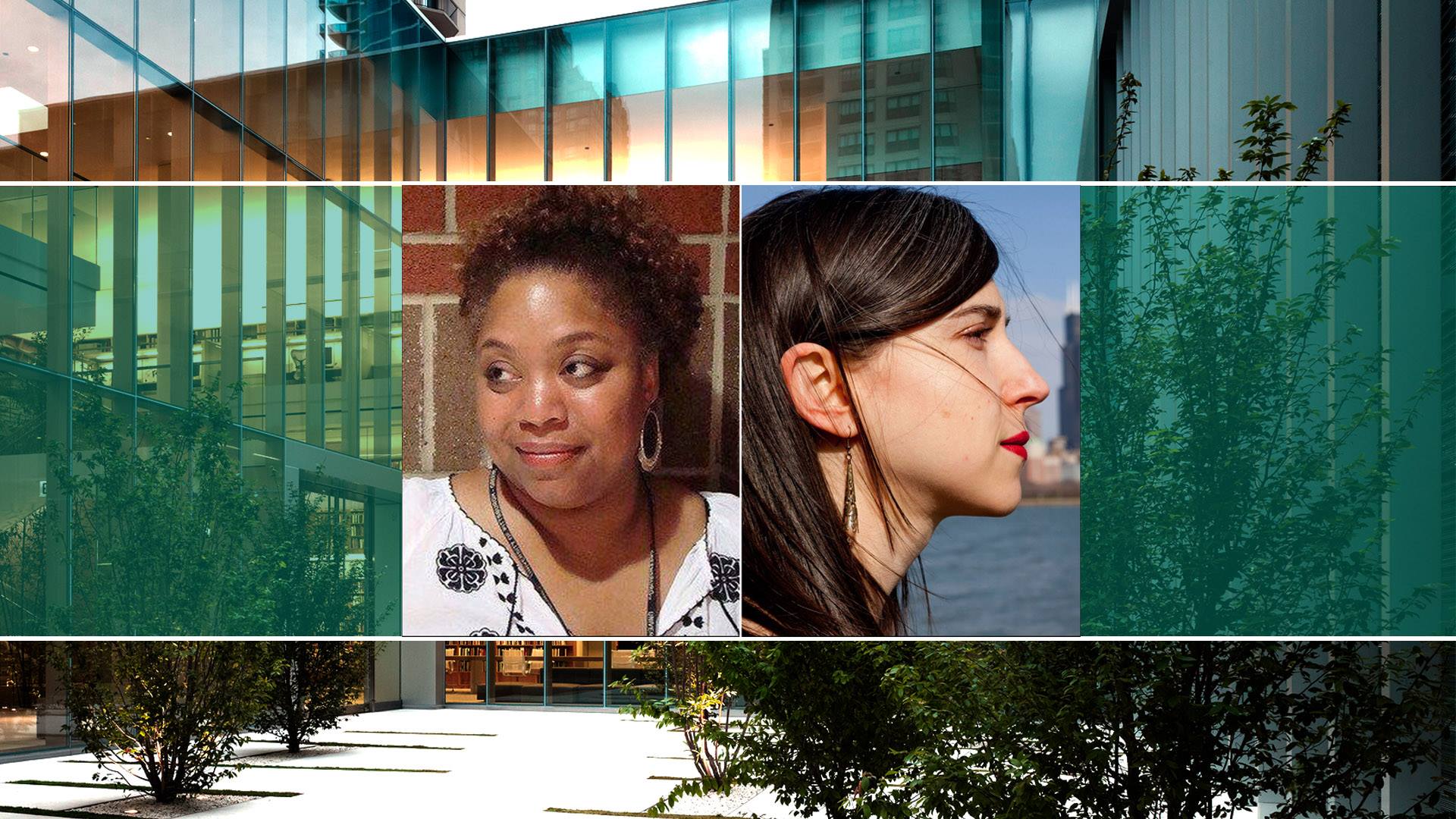 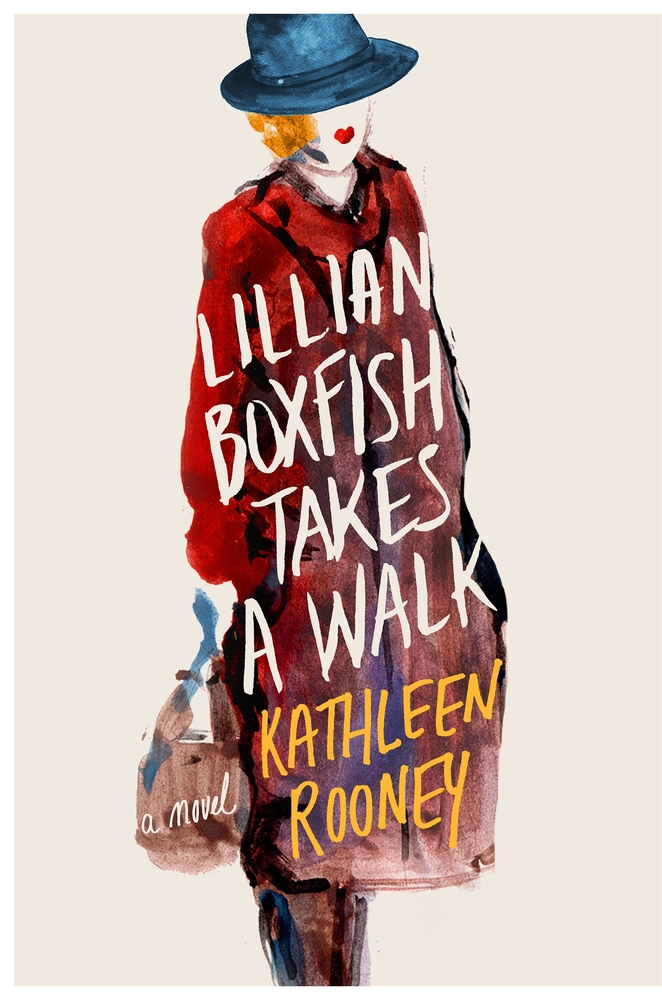 by Robert M. Keding
contributor to the Underground

Packed in to a small meeting room in DePaul’s Richardson Library, a large audience gathered to hear authors Kathleen Rooney and Martin Seay read selections from their newest novels, and then answer questions on their creative processes and experiences within the literary world.

Seay’s advice to aspiring writers is to do a lot of background research, especially for period pieces like The Mirror Thief. “Even if you have the facts and details right, you still have to make sure the dialogue flows correctly too. Otherwise you might just end up with characters that sound like the people faking British accents on the subway,” he told the crowd. To get the sixteenth-century portions of the story sounding right, he found himself reading a lot of literature of that time—especially Shakespeare.

Kathleen Rooney spoke about her recent novel, Lillian Boxfish Takes a Walk. This is her second novel, and was just published by St. Martin’s Press in the first weeks of 2017. The story chronicles an aging Lillian, going for a stroll around New York City and recounting various moments during her life, from humble beginnings to a career as the highest-paid woman in American advertising.

Rooney’s advice touched on the differences between writing prose and poetry, another realm of literature which she is invested in. “It’s possible to accidentally sit down and write a great poem. It’s a task so durationally shorter and full of so many chances for happy mistakes… It is, however, much more difficult to sit down for an hour or two and come up saying, ‘Whoops, I just accidentally wrote a really well-crafted novel!’” The room, undoubtedly filled with aspiring writers, could certainly relate.

Be sure to look for The Mirror Thief and Lillian Boxfish Takes a Walk, in bookstores now. 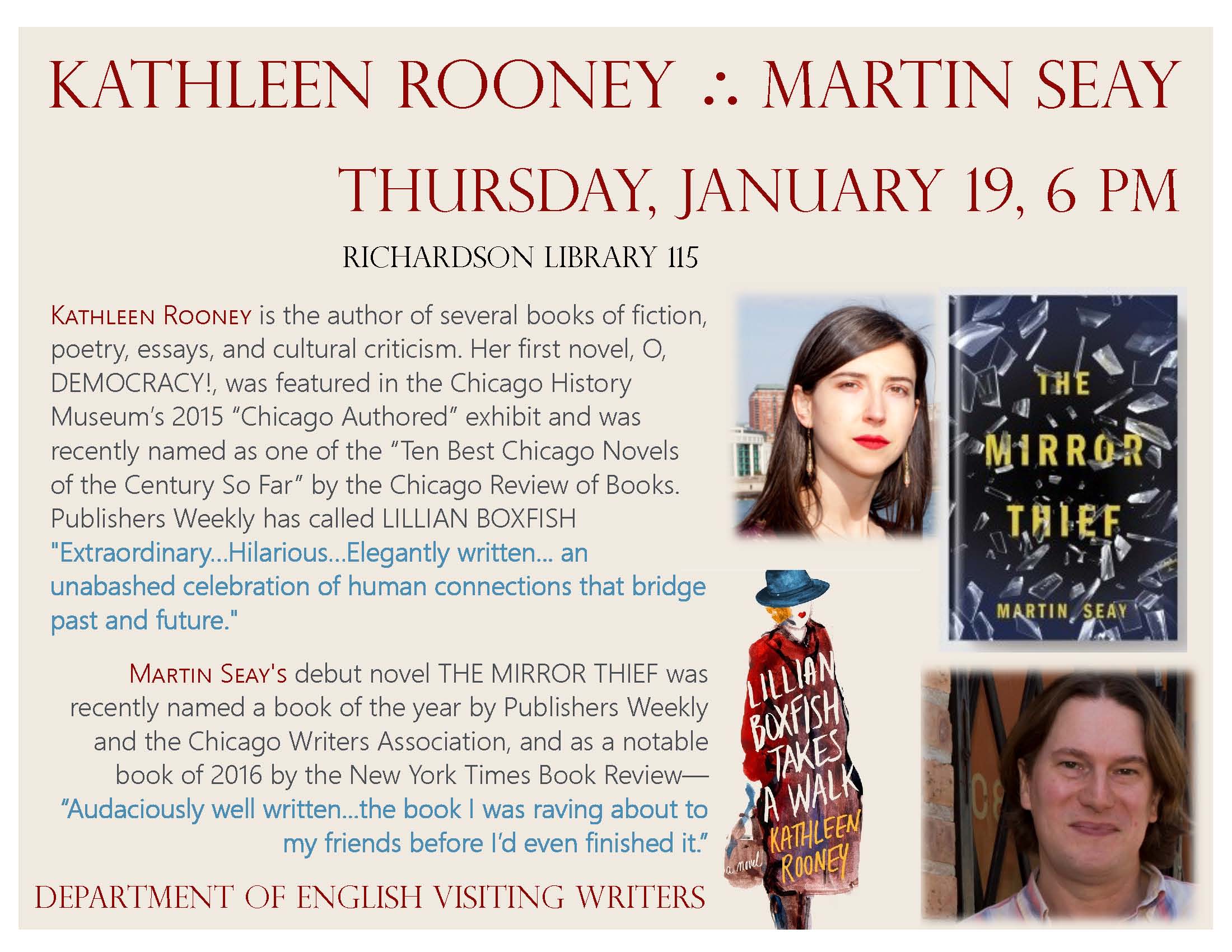 René François Ghislain Magritte, commonly known as René Magritte, is a renowned Belgian painter born in 1898. “The artist, the man, the aspiring noirist, the fire-breathing theorist”—in his own words.

On November the 2nd in DePaul’s Arts and Letters Hall, Kathleen Rooney and Eric Plattner hosted a reading of their co-edited book, René Magritte: Selected Writings (University of Minnesota Press and Alma Books, 2016).

The room filled with students and faculty, eager to hear and learn. Outside, the sky turned gray, and raindrops clattered on the windows. The Cubs will win tonight was the chatter that sparked around the room; many wore their Cubs jerseys. The Cubs are bound to make history  was the hope in many Chicagoans hearts.

This book project of Rene Magritte began about two years ago—at last the finished product is in hand and it is a marvelous work of art.

Kathleen Rooney is a founding editor of Rose Metal Press and a founding member of Poems While You Wait. She teaches English and Creative Writing at DePaul University and is the author of eight books of poetry, nonfiction, and fiction, including the novel O, Democracy! and the novel in poems Robinson Alone. Her latest novel, Lillian Boxfish Takes a Walk (St. Martin’s), will be published in January 2017.

Eric Plattner is an adjunct professor of writing, rhetoric and discourse at DePaul University.  A graduate of the Iowa Writer’s Workshop, he has translated the works of Nelly Sachs, Ernst Toller, Georg Trakl and etc. He is a founding member of Chicago Collective, Poems While You Wait and a consulting editor at the Community Literacy Journal.

Rooney read an epigraph from a letter from poet Guy Rosey, with whom Magritte corresponded. “You are far from being the occasional writer you claim to be, but you are, in my eyes and in the eyes of many others, a poet who sheds an unforgettable light on himself and his painting.”

Plattner followed with another writing of Magritte, “Nausea Takes Me.” In this piece, Magritte speaks about the way that he perceives his paintings. He speaks about the fact that he places objects in places where we never would be able to encounter them. In the end, Magritte defends his style with one simple statement: “Neither modest nor proud, I’ve done what I thought I had to do.”

Rooney and Plattner shared other works of Magritte such as: “You,” “The Condemned Man,” “On Titles,” and “Magic Lines.”

For the final piece, Rooney and Plattner joined their voices as they read an aphorism by Magritte. “There are no idiots, there is only idiocy. Idiocy consists in believing you understand what you do not understand.  It’s demonstrated among other things, by the impossible pompous boring twaddle written about painting.”

A round of applause filled the crowded room. For the rest of the event the crowd asked their questions.

Rooney stated that it took about two years to complete the book. The only typewritten copy of the book was translated by Jo Levy, but there were no printed books available. So, after a lot of emailing back and forth with different individuals, they finally found out that the book was supposed to come out in 1987, but the publishing company had folded. At last, the one copy that still survived was finally OCR-ed from France to Rooney. Thus, Rooney and Plattner got to work and started the journey of shaping and creating the manuscript into a publishable book.

A cool fact that I found out in regards to Magritte is that we share the same birthday month—he was born a day before me and 95 years ahead of my time. I enjoyed this particular reading, primarily because I’ve always been a Magritte fan (although I never knew that he was a poet and writer), but also because the work that Rooney and Plattner have done is exemplary and of the utmost importance, especially for fans or admirers of poetry, art and prose.

This event was possible due to Department of English Literary Studies Speaker Series. The Department will provide more readings throughout the academic year. Stay tuned for other events. 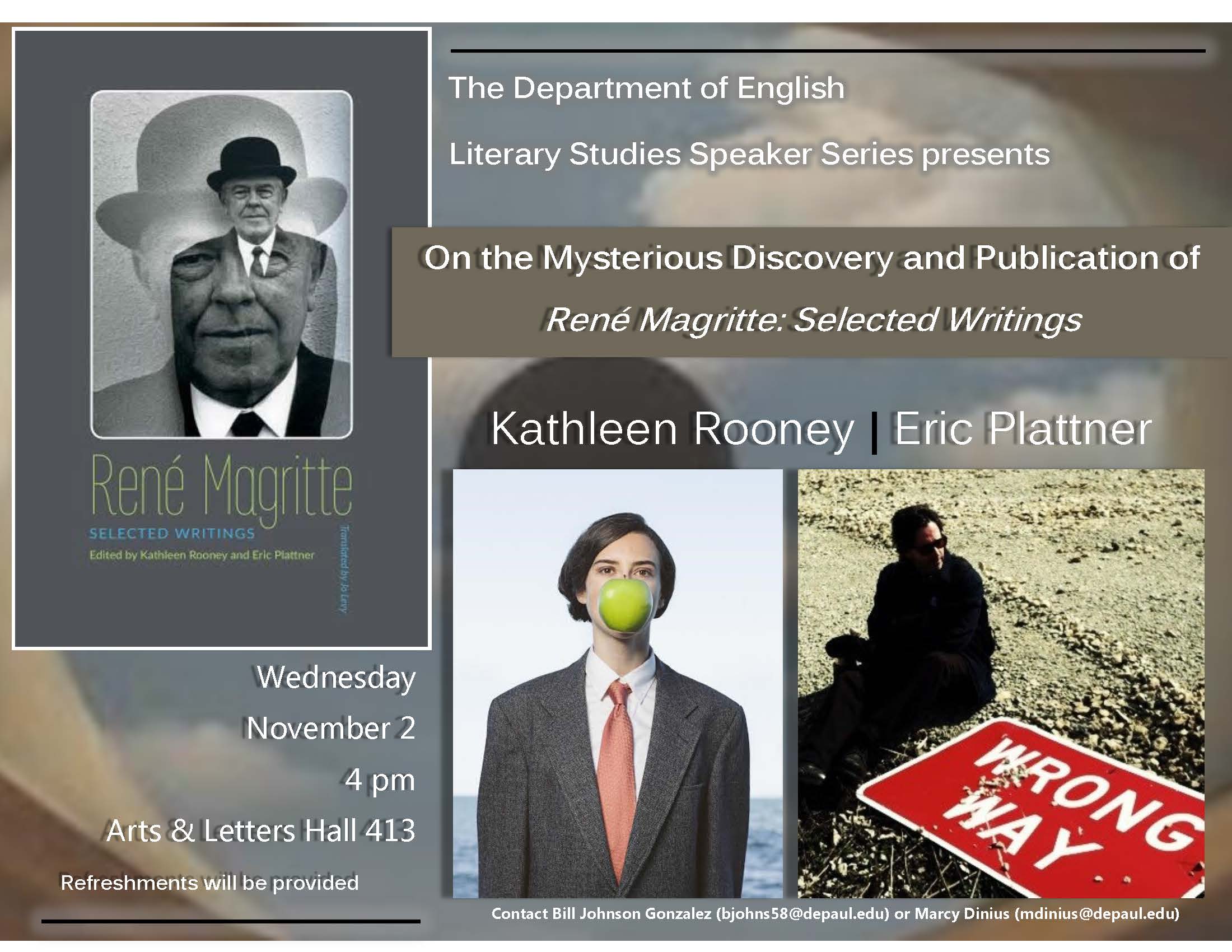 You might remember our October post about the release of Professor Emeritus Jeremy Mulderig’s new book Philip Sparrow Tells All. Mulderig read from the book here at DePaul in December, and the book has been reviewed favorably in The New York Times. Read the review here. 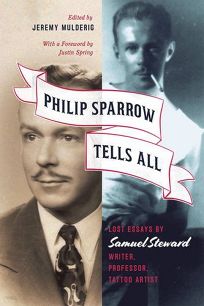 Professor Kathleen Rooney also reviewed the book for the Chicago Tribune, which you can see here.

The Department’s resident Renaissance woman, visiting professor Kathleen Rooney, recently reviewed Days of Shame & Failure by Jennifer L. Knox. The review appeared in the December 27th issue of the Sunday Book Review, an issue that focused on the Year in Poetry. 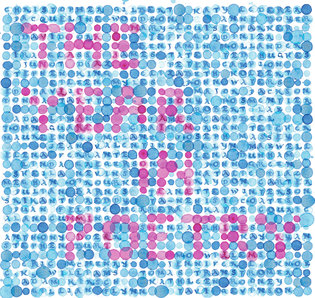 DePaul is making its mark in the thriving Chicago literary scene lately! First George Saunders, and now, two of our professors–one of whom, Michele Morano, is the director of the M.A. in Writing & Publishing program–have been featured in NewCity‘s Lit 50, a roundup of movers and shakers in the Chicago literary community.

Director of the Graduate Program in Writing and Publishing, DePaul University

” In the past four years, Director Morano helped transform DePaul’s Creative Writing MAWP from a general writing program into one that injects life into the Chicago literary and social landscape. Students have been research assistants for Eula Biss and Alex Kotlowitz, and helped orchestrate interviews for “How Long Will I Cry: Voices of Youth Violence.” That book, which later became an acclaimed Steppenwolf play, was the first from Big Shoulders Books, a company Morano created with colleagues to help give students publishing experience at every level. Strengthening both the focus on community and publishing, Morano says this fall, DePaul plans to offer creative writing classes open to anyone with a bachelor’s degree, and is debuting a graduate certificate in publishing soon. “

” If Kathleen Rooney played baseball, scouts would call her a “five-tool player”: novelist, poet, essayist, editor, publisher, live-lit performer and professor at DePaul University. Rooney, with Abigail Beckel, co-founded Rose Metal Press, which has published hybrid genre works (by other writers only) since 2006. Rooney also co-founded Poems While You Wait, a diverse collective of poets who write poems to order on manual typewriters at public events, and she performs as Vivian Nightwood with the Poetry Bordello. Rooney says “Chicago is a city full of innumerable talented people doing innumerable interesting things.” Few cover as many bases as Rooney. “

Head on over to the LitCity website to check out the full story here. Note our nifty ad at the top of the page!

The Department of English congratulates faculty member Kathleen Rooney, who has just been named a finalist in the Adult Fiction category in the 2015 Society of Midland Authors Awards!

Kathleen Rooney is a founding editor of Rose Metal Press, a nonprofit publisher of literary work in hybrid genres, as well as a member of Poems While You Wait, a team of poets and their typewriters who compose commissioned poetry on demand. She is the author of six books of poetry and nonfiction including, most recently, the novel in poems Robinson Alone (Gold Wake Press), based on the life and work of Weldon Kees, the essay collection For You, For You I Am Trilling These Songs (Counterpoint, 2010), and the art modeling memoir Live Nude Girl: My Life as an Object (University of Arkansas Press, 2009). Her first book is Reading with Oprah: The Book Club That Changed America (University of Arkansas Press, 2005), and her first poetry collection, Oneiromance (an epithalamion) won the 2007 Gatewood Prize from the feminist publisher Switchback Books. With Elisa Gabbert, she is the author of That Tiny Insane Voluptuousness (Otoliths, 2008) and the forthcoming chapbook The Kind of Beauty That Has Nowhere to Go (Hyacinth Girl Press, 2013). She lives in Chicago where she is a Visiting Assistant Professor at DePaul University.