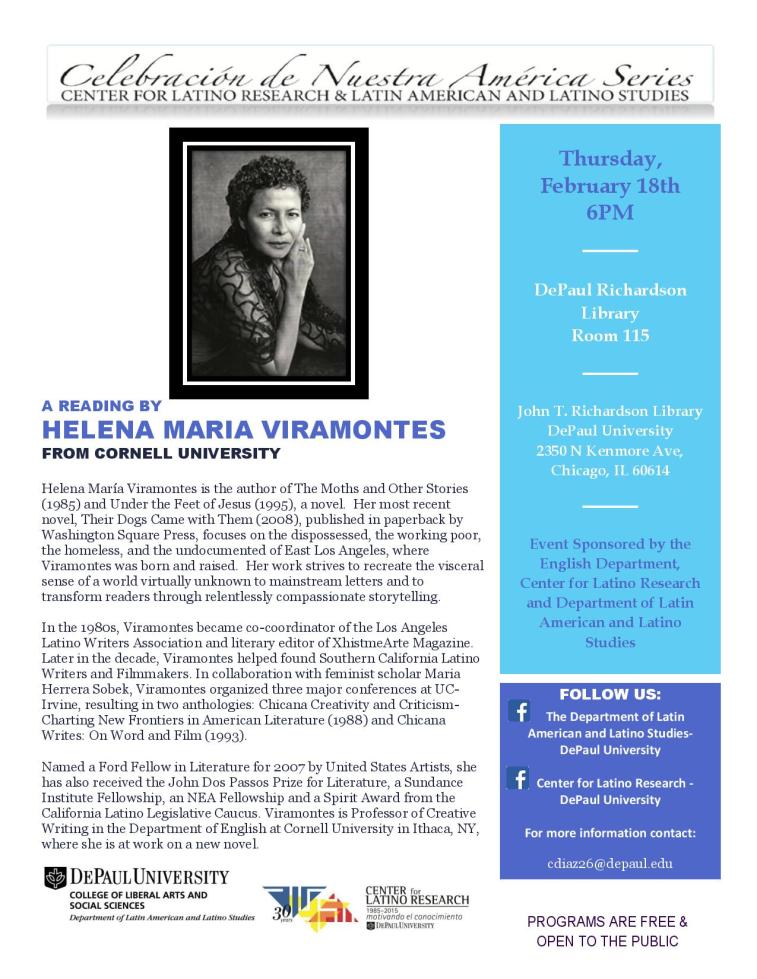 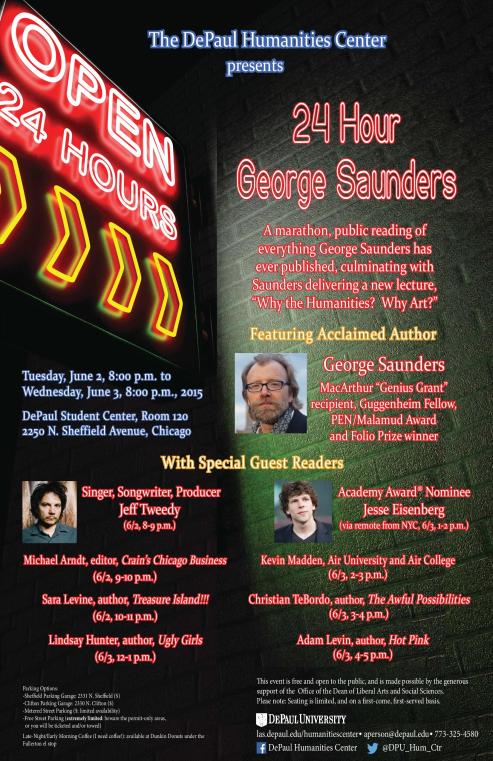 Please join the DePaul Humanities Center and the Office of the Dean of the College of Liberal Arts and Social Sciences for a special event investigating the future of the humanities.

From 8:00 p.m. June 2 until 8:00 p.m. June 3, the DePaul Humanities Center will be hosting “24 Hour George Saunders,” a marathon, public reading of everything that best-selling author and MacArthur “genius grant” winner George Saunders has ever published, culminating in a new lecture by Saunders in the final hour entitled, “Why the Humanities? Why Art?” Celebrity readers include Wilco’s Jeff Tweedy, Academy Awardâ nominee Jesse Eisenberg, and a special surprise guest reader in the penultimate hour. Other DePaul faculty and students–as well as Chicago artists, authors, scholars, and celebrities–will also be reading for an hour according to the following schedule:

Following the 24-hour marathon, The New Yorker will be publishing Saunders’ lecture to us. You will also be able to watch highlights from the marathon as well as all of Saunders’ address on the DePaul Humanities Center’s YouTube channel.

We are using #24hrsaunders to promote the event.

This event is free and open to the public. Seating will be on a first-come, first-served basis throughout the 24-hour reading, and capacity will be limited.

George Saunders is a New York Times bestselling author who is known for his collections of short stories. His works include Congratulations, By the Way, Tenth of December, and CivilWarLand in Bad Decline. Born in Amarillo, Texas, Saunders grew up in the south suburbs of Chicago. He earned a degree in exploration geophysics from the Colorado School of Mines. After spending time as a geophysicist on the Indonesian island of Sumatra, Saunders returned to the United States to pursue a writing career. In 1992, his short story “Offloading for Mrs. Schwartz” became the first of many of his works that would be published in The New Yorker. In 2001, Saunders was selected by Entertainment Weekly as one of the 100 most creative people in entertainment, and by The New Yorker in 2002 as one of the best writers 40 and under. In 2006, he was awarded both a Guggenheim Fellowship and a MacArthur “genius grant” Fellowship. In 2009, he received an Arts and Letters Award in literature (formerly Academy Award) from the American Academy of Arts and Letters. Saunders earned a master’s degree from Syracuse University, where he has been teaching in the Master of Fine Arts program since 1996.