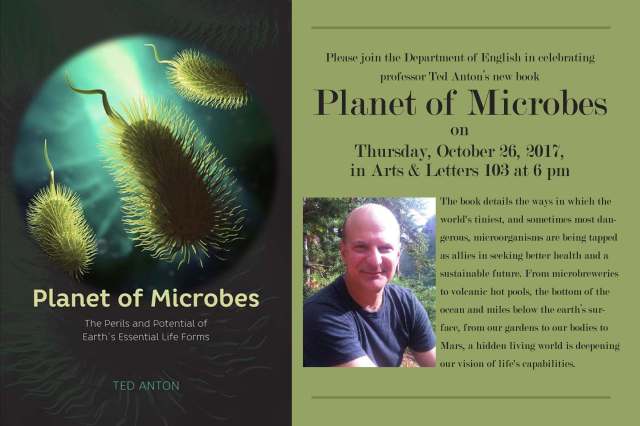 Ted Anton’s latest book release, Planet of Microbes: the Perils and Potential of Earth’s Essential Life Forms, was hosted in the Arts & Letters building at six in the evening, on Thursday, Oct 26. The lecture hall was filled with students and faculty.  Rebecca Johns-Trissler presented Anton in a brief bio. Anton’s previous publications include The Longevity Seekers (University of Chicago Press, 2013), and Bold Science: Seven Scientists Who Are Changing Our World  (W.H. Freeman, 2000, Paperback: 2001). His book Eros, Magic and the Murder of Professor Culianu (Northwestern University Press: 1996) won the Carl Sandburg Award and was a finalist for a Book Award from the Investigative Reporters and Editors.

Music was heard from backstage as Anton walked in playing the trumpet. The audience applauded frantically. Dressed in a blue t-shirt and blue khakis, Anton smiled as he played. He thanked the students and his colleagues for helping him shape the book. Anton had prepared a PowerPoint, and he took the audience through an hour-long presentation about his research.

He spoke about the ways our lives might depend on microbes. “The same chemicals that can kill us can also save us. Most of our antibiotics come from microbes,” said Anton.

“How many microbes are on earth?” he asked the crowd. Someone shouted, “Can you give us multiple choices?” As some guessed the answer, Anton said, “There are actually 10 to the 30th power, which is more than the number of stars in the Milky Way galaxy; if you line them up they would extend from earth to the sun and back two hundred trillion times.”

Anton ended his presentation by reading a snippet of his book. The passage spoke about the NASA conference in Chicago and Anton’s thoughts as an observer, writer, and a scientist as he faced the greatness of life among the fellow L commuters in the downtown district.

Anton completed his presentation by playing the flute and taking questions from the audience.

Upcoming presentations of the book will be hosted at Columbia University, University of Chicago, and others.