I found inspiration from the website, Polymic‘s, “7 Works of Literature Worth Reading During Black History Month” to write this short piece. I thought it would be great to share more influential pieces of literature to try out this month in honoring black history. My undergraduate professor of John Carroll University, Dr. Chris Roark, who recently passed away, introduced me a diverse selection of African-American Literature. With his guidance, I gained confidence in my knowledge of Black literature and deepened my passion language as a form of self-expression–which is ever so prominent in African-American literature. This list includes some of the texts he illuminated to many English students.

Not that I have any authority over the subject matter, but these works are simply beautiful, creative pieces that I believe are worth a read!

1. But Beautiful: A Book about Jazz, by Geoff Dyer
Interested in music–specifically jazz? This novel creatively illustrates the various lives of famous jazz musicians including, but not limited to: Charles Mingus, Theolonius Monk, Bud Powell, Chet Baker, and Ben Webster. In a “quasi-biographical” fashion, the story depicts nine diverse jazz musicians and how their personal backgrounds influenced their music. If you don’t like jazz, you might after reading this unique novel. I suggest putting on “Ruby, My Dear” by Thelonious Monk while reading, it will definitely add to the textual experience.

2. Fences, by August Wilson
This critically acclaimed play tackles the problem of black manhood in the 1950’s. Wilson’s Fences illuminates the problems of Black identity. The play’s main character, Troy, attempts to integrate his past experiences as a Negro Baseball player with the modern 1950’s lifestyle of his family. The reader is swept away through the raw, honest dialogue between the characters and the deep-rooted, effective symbolism. It’s a fast, worthwhile read for anyone interested in this topic!

3. Sent for You Yesterday, by John Edgar Wideman
Wideman’s novel, published in 1983, surrounds the return of Albert Wilkes to his hometown and neighborhood of Homewood, set near Pittsburgh, PA. The novel depicts the life of various community members including the unique character, Brother Tate. Wideman examines the notion of Black self-image within historical and social contexts of the U.S., particularly in Homewood. Music and language are exhibited as forms of therapy for the characters in the novel. Wideman creates thoroughly constructed characters with which his readers can empathize and gain understanding.
4. Incidents in the Life of a Slave Girl, by Harriet Jacobs
Jacobs’s work was truly unique for its time: it was a story written by an African-American woman, but also slave (as the title suggests). Under a different pen name “Linda Brent,” Jacobs described the harsh realities of slavery through her experiences. The novel exposes the particular brutality that slave women faced as they were continuously raped, ripped apart from their children, and treated poorly from their female superiors. This work marked a change in literature; literature began exposing the immorality of the U.S. law. 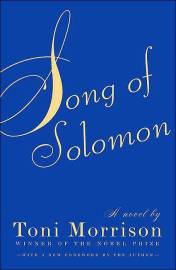 5. Song of Solomon, by Toni Morrison
Of course I cannot leave out the talented, Toni Morrison from my list. While The Bluest Eye, Tar Baby, and Sula are great works, among her many others, this work is one of my favorites because of its magical realism. Morrison incorporates biblical allusions and magical realism, with emphasis on human flight. This style of writing draws in the reader to a heartbreaking tale surrounding the main character, Milkman Dead. The novel touches upon topics such as the impacts of racism, the abandonment of black women, and the significance of names. One of her more imaginative works, Song of Solomon, is a beautifully written novel where Morrison draws in the reader and arguably speaks through the narrator, “You wanna fly, you got to give up the shit that weighs you down.”

Each of these texts bring something new to African-American Literature, and there many more works out there to be read. You may have others you’d suggest to others, please feel free to comment on The Underground blog and share more!