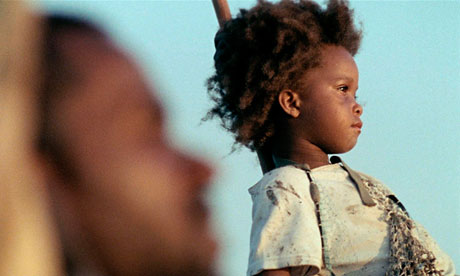 Film Review: Beasts of the Southern Wild
by Nick Scully

If you’re like me, you made a plan about a month ago to try to watch all the films nominated for Best Picture at the Oscars.  If you’re really like me, you’ve only seen a couple of them and the big night is creeping up faster than you thought possible.  Maybe you’ve started going through your “To Watch” list and have started crossing out those movies you hadn’t heard of, or don’t consider to be serious contenders.  I’m here to tell you to put your pen down; do not cross Beasts of the Southern Wild off of your list.

It centers on the story of a little girl named Hushpuppy and the small bayou community called “The Bathtub,” a poor town on the outskirts of civilization.  Everyone in the town is close with one another, and they celebrate the fact that they don’t live on the other side of the levy, despite their obvious struggles to survive.  Hushpuppy believes that the world works in harmony; the animals that she cares for speak to her in codes.  The childlike imagination through which Hushpuppy views her world is one of the most gripping points of the film.  When a giant storm comes through and almost everyone evacuates, the few left behind—including Hushpuppy and her father, Wink—must band together to survive the floodwaters and protect one another while remaining independent from the rest of the world.  It incorporates a wide range of allegories and blends between fantasy and reality—which quite frankly, I still haven’t figured out.  Nonetheless, it is an emotional tour-de-force that doesn’t shrink back from the uncomfortable, but retains the heart and love that can only be found in the innocence of childhood.

The movie originally only played film festivals and is the first feature film by BenhZeitlin, who is nominated for Best Director this weekend. The cast of Beasts were not trained actors, which surprisingly makes for very convincing performances all around.  But the obvious standout and driving force behind the film is the now nine-year-old, Quvenzhané Wallis (pronounced: kwuh-ven-jah-nay). Wallis lied about her age in order to audition for the part (she was only five), and she was six throughout the majority of filming. There has been much buzz about the fact that she is the youngest person ever nominated for Best Actress at the Academy Awards, but she is the youngest person ever to be nominated for any major award at the Oscars when you consider age during filming.

The utter force behind Wallis’s acting is incredible; I guarantee that you’ve never seen a person so young with as strong a screen presence before. She’s so direct that it all seems effortless for her, and yet you can’t help notice the pain and rage in Hushpuppy’s eyes. All at once, you can see Hushpuppy’s fear of losing everything she knows and her defiance against the forces that change her life. This kind of raw talent isn’t something one comes across every day. I doubt this movie would have been so well-received without her.

So while Beasts should be at the top of your list for its magic and its heart, you should definitely watch it if only to see Quvenzhané Wallis in her breakout performance as one of the youngest and most courageous heroines of the year. In any case, this is not the last time we will be seeing her on the big screen—and I would not be surprised in the slightest if we will be hearing a speech from her on Sunday night. 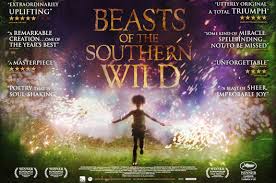 About the Writer:
Nick Scully is a senior Creative Writing major from the Southside of Chicago. He loves movies and television, and watches too many shows to keep up with; luckily, reading and writing have always had a huge impact on his life, and both help him to stay well-rounded.