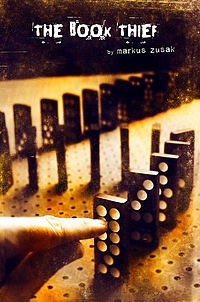 Written in 2006, The Book Thief was met with much success and won numerous awards, including being named as Best Book by the School Library Journal and the Young Adult Library services Association.

The protagonist, Liesel, is an orphan who finds love from a strange array of characters on Himmel Street, a poor part of town in Nazi Germany. There is her Mama, Rosa Hubermann, who expresses her love for Liesel by regularly beating her with a wooden spoon and calling her a “dirty little pig;” her Papa, Hans Hubermann, is a kind man who teaches Liesel to read in the dead of night; then there is Rudy, a boy who painted himself black with charcoal and decided to run like Jesse Owens, an American Olympian in the 1936 games.

Liesel is not an ordinary girl, as she has endured more than a young girl should. But after all, it is Nazi Germany, and these are not ordinary circumstances in which she lives. Through the course of this novel, she finds power and love in books and words as Hitler’s regime threatens to destroy everything and everyone Liesel holds dear. I cannot say much more about the plot because events happen quite slowly in Liesel’s life, until Max enters the scene, or more accurately, hides in her basement.

This is also not an ordinary book, as far as the narration. The genius of this book is Zusak’s decision to have Death narrate Liesel’s story, but he is not presented as the Grim Reaper. As Death puts it himself, “I can be amiable. Agreeable. Affable. And that’s only the A’s.” Death was vulnerable, and that vulnerability made the novel show that “humans can be worthwhile, and beautiful, even in the ugliest of times.”

This novel is achingly sad, in that while I was reading it, I constantly found myself clutching my heart. This novel forces the reader to be present on Himmel Street while to caring and rooting for Rudy and Liesel. It’s the type of novel that demands to be read.

Although it is 552 pages long, I highly suggest reading this book (if your attention span allows). Liesel’s experiences are hauntingly beautiful, and the people she meets a long the way…well, you should meet them, too. They might just make you believe in the power of words.

If you are interested, the Steppenwolf Theatre is producing its adaptation of The Book Thief from October 16th to November 19th. The public performances are on Saturdays at 3:00pm and 7:30pm, and Sundays at 3:00pm.

About the writer:
Jennifer DePoorter is a sophomore at DePaul, double majoring in Journalism and English, and is from Detroit, MI (Go Lions!). Her favorite book is The Catcher in the Rye, and while she is not writing, she enjoys watching terrible reality television shows.